Updates on RD-3D now that he's done a few shows

The one thing I've learned as I've really gotten into the Maker Movement is that rarely does anything work right the first time. You have to keep researching, learning, testing, and trying new things. 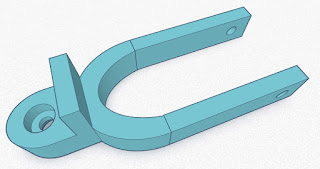 Another problem I had was with the front forks. I designed them in TinkerCad using measurements of the button wheel I made with my calipers. I added a little "shelf" perpendicular to the forks that fit under the lower lip of the can to keep the forks steady.

Unfortunately I measured the width of the button in the CENTER and failed to account for the outer lip of the button which is a little bit fatter. No big deal. The button-wheel I measured was actually 2 buttons glued together, so I could still use a button, I just had to use a single button rather than the double I had wanted. 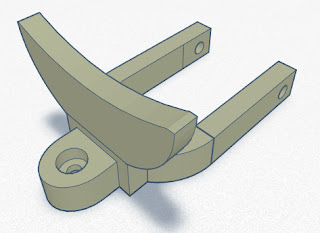 But then another problem arose. RD-3D started turning while he was moving. It was as if he were steering off-course. It seems that the little "shelf" I made didn't to as good a job as stabilizing the forks as I had wanted. So, I decided to go back and redesign the forks, making them wider (to hold a double-button wheel) AND to also improve the shelf so that it would stabilize with the can better. So I greatly increased the size of the shelf and also contoured it to the curve of the can which makes it nearly impossible for it to pivot around the screw like it had been doing. So far, so good.


But there is one more issue I've been dealing with. The 9 v. batteries I've been using seem to go dead after just 4 shows. There is NO REASON for them to die that quickly. I mean, they aren't DEAD-dead, just low enough that RD-3D can't move. His lights still turn on and blink quite brightly, and he has enough power to do his "shaking" thing (which turned out to be one of the funnier jokes in the show).

When he's supposed to move across the table, I can hear his motor struggling, but he doesn't actually move. I think I know what the problem is, and I'll report back on it whether I'm right or wrong.
Posted by Julian Franklin at 1:29 PM

Email ThisBlogThis!Share to TwitterShare to FacebookShare to Pinterest
Labels: Arduino, MakerSpace, Robot, Summer Programs, Take Me to Your Readers, Universe of Stories