My Rat is Having a Birthday!

My rat is having a birthday.

Well, he's really just a puppet. So I don't know how much you can really celebrate a birthday, or even how or why anyone would.

Okay, here's the real story. I do a lot of puppet and ventriloquism in my presentations. The kids really love the puppets. They write them fan mail. I'm not kidding.

So I decided to get a business card for one of my puppets. Then he had to have his own web site. Rather than let it get out of control as I added more puppets, I simply put them all on the same web page. When I did I included basic "facts" about each of them, including their birthdates. I tried to be creative with this.

For example, the rabbit's birthdate is February 29. Just think about that for a while.

The Dragon's birthdate is April 1, because dragons...well, they don't exist, so all the "data" is sort of a joke.

Anyway, you get the idea. Livingston, the rat puppet, is really the star of the show, so we share the same birthday.

Check out the web site so you can see all the puppets, and find out some facts about them.

http://DavidHopperfield.com (that's my magic bunny rabbit's name)
Posted by Julian Franklin at 11:41 AM No comments:

My Daughter is in Love and She's Only FOUR!

My daughter is in love. She's not quite four yet.

Of course, she's not in love in the romantic way. She's in love like three and four year olds get. Awe struck. Like me when I got to see Rita Pearlman from "Cheers" yesterday at a book signing. I'm thinking "There she is. In the same room I am. She seems so normal."

She was probably NOT thinking the same thing about me. 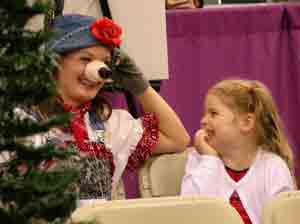 So here's my daughter. And she's sitting right next to none other than herself, THE big, bad wolf. That's right, the same one from all the childhood fairy tales. Only, this one is nice. I know. My daughter talked about her all night last night...

"Daddy, pretend you're the nice wolf-girl and I'm in the woods and I'm lost."

In case you were wondering. My daughter came with me to a trade show I was working and got to meet some of the other vendors. The Wolf-Girl is actually Christina from Storybook Theatre of Texas. They do school assembly programs like I do. I also got to hang out with author/singer/songwriter/musician Lucas Miller, the singing Zoologist (Lucas presents VERY funny and educational music in a really cool way), Trixie Bond (world famous magician who has performed at hundreds of amazing venues, including The Magic Castle and even the White House for the past two years), and Joe McDermott (a hilarious singer/songwriter from Austin who can get a group of kids singing the silliest songs you've ever heard). Don't buy his CD though unless you want to be caught singing his hypnotic tunes all day with words like "Don't drop a brick on your foot, it will hurt. It will make you hop around in the dirt."

And to think, we all get paid to do this stuff!
Posted by Julian Franklin at 5:11 AM No comments:

If you spend enough time around kids you get to hear some really funny things. As a school show presenter who does library author visits, motivational assembly programs, and reading reward programs in schools and libraries all over the country, I see my fair share of kids.

Just by way of record, my schedule is posted on-line and you can see that I stay pretty busy. That's a topic for another post, because right now I want to tell you something funny my own daughter said.

First of all, you have to understand that my wife and I are fairly active, kind of "outdoors-y" people. We like to camp, my wife wears almost no make-up and when I'm not performing we tend to wear very comfortable clothes. My daughter on the other hand is feminine through-and-through. She ONLY wears dresses and skirts and has refused to cut her hair since the day she was born! She's almost four now and her hair is down to her tail bone.

Anyway, one day I was crawling around on my hands and knees and she was riding on my back like a horse when I got going too fast (as dad's tend to do) and she fell off. Well, mom yells, but this girl is as tough as nails. I tell my wife "Don't worry, she's tough as nails" then I tell Madeleine "Go tell momma you're tough as nails".

So Madeleine walks over to her mother, and calmly extends her pretty, pink-painted finger tips, wiggles them and says "Don't worrry momma, I'm tough as nails!"

THAT is my daughter!
Posted by Julian Franklin at 5:42 AM No comments:

This is Why I do What I Do

This is why I do what I do.

My bachelor's degree is in Business. My masters coursework is in Education. And all my life I've been a performer.

I've written more than a dozen books, all non-fiction, most on the business end of show business. I write a monthly column in two different trade journals for performing artists, as well as writing my own monthly e-newsletter on business topics for service providers (you can sign up for free at www.JulianSpeaks.com). 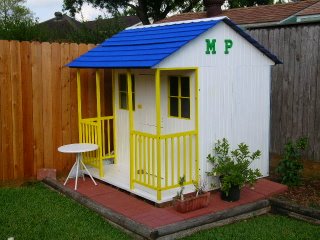 But I wanted this forum to be something different. I wanted this forum to be about me as a person. I wanted to share a little bit about the guy you see on stage, when he is NOT on stage. I promise to go slowly; I don't want to reveal all my warts at once. And I'll try to focus on the side of my life that is really interesting and beautiful, the reasons why I push for success in my business as hard as I do. I'll share a little bit with you about what motivates and inspires me.

I'll start with this: It's a picture of the playhouse we just finished putting together for my soon-to-be-four-year-old daughter, Madeleine. She's CRAZY about the play house, as you might imagine if you know children. She's an amazing girl.
Posted by Julian Franklin at 5:30 PM No comments: