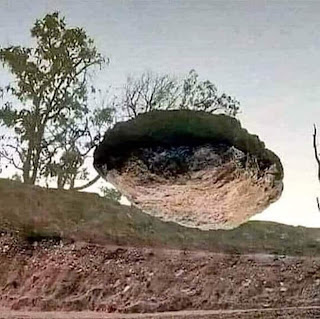 Have you ever seen one of those pictures where you see one thing, and then after a while you see something else that makes you realize your first impression was totally wrong? Like this picture that seems to be a floating rock, but is actually just a normal old rock, in the middle of a pond. You're just looking at it upside down.

I've had a photograph that was taken by a staff photographer working for the Museum of Fine Arts Houston,Bayou Bend Collection. The photographer and I agreed that it perfectly captured the silliness of my show while also demonstrating the audience participation and the scientific principles and skills that I teach in this particular show. I put the picture on my website where it has been for many, many years. It's one of the photographs I uploaded to my Google page. If you do a Google search for my name, my business will open on the right and you can see a map of the area I work, leave a Google review, read the other reviews from past clients AND see pictures that I and others have uploaded including this picture that is one of my favorites.

I recently used the picture in a postcard mailing that went out to roughly 3,000 elementary schools across Texas. The cards started landing yesterday and I already got my first “complaint.” It seems that the picture I so love can appear to be something “lewd” and “inappropriate” if glanced at quickly (which is how we normally look at a postcard with lots of pictures on it). 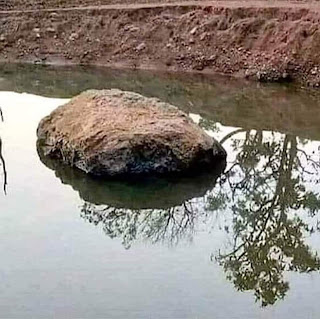 The photographer who took the picture, as well as everyone who has seen the show I do when this picture was taken, had to really “stretch” our imagination to see it in any way OTHER than what is actually happening. But we are looking at the picture in full context of the show we remember. It's like looking at the rock picture right side up. It's nearly impossible to see a “floating rock” from this angle.

But it still looks like a floating rock from the other perspective. To deny it, I'd have to bury my head in the sand. Believe me, I want to dismiss this as one “over-reactive” person, but I don't think that's the case at all. I have to turn the picture around to see it from the other perspective and admit that it really looks like the rock is floating in the air...or in this case that the picture seems to appear to imply something other than what is actually happening. 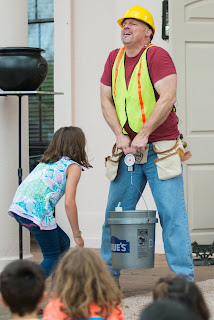 I debated about whether or not to even include it in this blog post but I can't stand when people post vague comments without providing any context. So I'm including it so that hopefully you can see both sides of the issue. I hope that you can see why I so love this picture. For those who haven't seen my show I'm “struggling” to lift a bucket of rocks that weighs 50 lbs. There is a scale attached to the bucket handle and so I'm telling the child to read the scale and while I “struggle” with the weight I'm huffing and puffing and saying “Hurry! It's heavy!!”

It's a very funny moment in the show, everyone in the audience is laughing, and this picture (in my mind) captures that moment perfectly.

From another perspective, particularly if glanced at quickly and without context, the angles and facial expressions might be misinterpreted as something less wholesome. That's disappointing to me, for more reasons than I care to articulate.

So I removed it from my website and won't be using it in any future marketing efforts. It's still on my Google page just because I haven't yet figured out how (or even IF) I can take it down. Now I'm worrying about the other 2,999+ recipients of the postcard and wondering what THEY think.

Posted by Julian Franklin at 8:05 AM No comments: