My Robot has New Wheels and a Name! 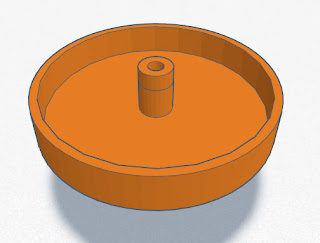 New Wheels and a Name

So the robot toy I bought has lopsided wheels. That's by design. When he rolls forward, it makes him wobble side-to-side and it looks a little like he's walking. It's cute. I like it actually.

But when I stacked 2 cans on top of each other using the 3D printed Tin Can Connector I designed, it caused the top can to topple after about 6" of travel, or less than two seconds. So I made this wheel design that I hoped would fix the problem. I emailed the file to the library and went to pick up two wheels (mine are green) a few hours later. At first I thought I would only need one, and the other would be a back up. I thought a LITTLE bit of swagger would still be something sort of funny. But it was still too much for 2 stacked soup cans.

Fortunately, I had two wheels and so I simply attached the other wheel also! So easy, right?

You see, now that I have these two new wheels, for some reason they don't get as much traction as the original wheels. Not sure why, but I found a solution to that problem also.

We happened to have a bag of size 64 rubber bands. They are the fat, wide (1/4") rubber bands. I cut them and used rubber cement to attach them around the wheel.

That didn't work because the rubber cement wouldn't stick...to RUBBER bands!! What?!

Then I realized that rubber bands are coated in a powder that keeps them from sticking to each other. I cut some new rubber bands (the first batch were covered with drying rubber cement) and washed them. Now the pieces stuck quite nicely. My wheels have TIRES!

I also broke part of one of my wheels and had to fix it with a gob of Gorilla Glue. I should not have tried so hard to CRAM the axle into the hub, but rather, should have drilled the hub out slightly to receive the axle easier.

That's because he's two cans of Chef Boy "RD" ravioli and lots of 3D printing.
Posted by Julian Franklin at 2:01 PM No comments: