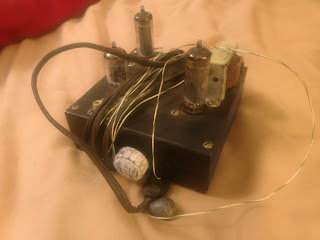 So the basic story for this summer (at least I THINK this is what's going to happen, but things change as the show unfolds), is that there is an alien that crash lands and we have to help him return to his home planet. There are several tasks, each exemplifying one aspect of maker space educational concepts.

So there's an artistic component, a coding component, and a component based on physical construction. Not that any of the children will (or even should) recognize the educational work behind the scenes. They should just realize that they are totally capable of rebuilding the spaceship and getting their new friend (alien puppet) back home in time for dinner. 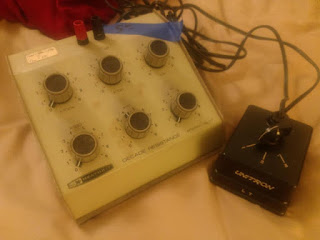 Fortunately we live near League City, so there's lots of NASA geeks that live here and sell some pretty cool looking gadgets at their garage sales. A lot of this stuff I have no idea what it does, but for a dollar or two I'll pick it up in the hopes that I can at least use it as a cosmetic embellishment on some of the stuff I'll be doing.

I know I said that writing a show is the hardest work I do, and it is. But it's also pretty fun!
Posted by Julian Franklin at 12:01 PM