Reading: The Sport of Champions

I should have told you in my last post about the premise of my motivational reading program for this summer. Since the theme in Texas is "Reading: The Sport of Champions" I wrote a library reading program that talks about sports, but also emphasizes reading. After all, reading is exercise for your brain! 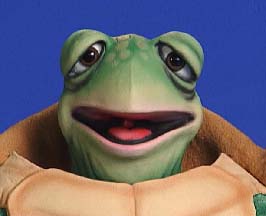 The premise of my show is Aesop's telling of the "The Tortoise and the Hare". In my production I get to interview both of the racers after the tragic event and also discuss their upcoming re-match. The interviews are hilarious with lots of jokes and puns just for adults (nothing "blue" in my shows, EVER, just references that usually fly over the heads of those younger than 14 or so).

He just tried harder, and longer, and more consistently than anyone else in history either before or since.

What a great pair of role models: The Tortoise and Lou Gehrig.
Posted by Julian Franklin at 7:41 AM

Hahaha... that was funny.